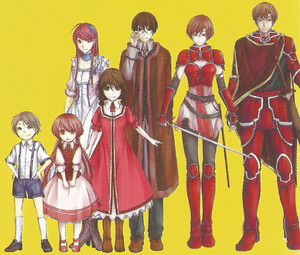 were a race of creatures residing in Bolganio. Created by gods, humanity was allowed to flourish in the Third Period by their creators. Intelligent and adaptable, humans formed various civilizations throughout history and dominated their world.

After the creation of the Third Period, humans were created by Levia and Behemo under the direction of the sun god and populated the continents of Bolganio and Maistia.[1] At some point, mankind invented farming, writing and magic use. Sometime after, the Levin religion was founded around the Sin relic located in the north. Over time, humans constructed numerous civilizations that developed into large sovereign powers, the most prominent being the Magic Kingdom Levianta in the Evillious region.[2]

Five centuries later, the Evillious Calendar was established in the kingdom and became used throughout the region.[3] In EC 013, the Magic Kingdom was destroyed in the Levianta Catastrophe.[4] Sometime after, the Tasan Empire collapsed as well, eventually being swallowed by the quickly growing Beelzenian Empire.[5]

In EC 325, civil conflict erupted in Beelzenia due to the apostasy of Duke Banica Conchita.[9] Asmodean then entered a war with Beelzenia. After the prolonged conflict, both countries were left in tatters by EC 399.[10] That same year, Beelzenia's Lucifenia territory declared independence from the empire.[11] During the EC 470s, Lucifenia began warring with both Asmodean and Beelzenia, becoming the new dominant power in Evillious by EC 490 as a result.[12]

During that period, the Beelzenian population was ravaged by Gula.[13] In EC 499, Lucifenia's populace suffered from a famine under the reign of Princess Riliane Lucifen d'Autriche.[14] Later that year, the monarch ordered an attack on the Kingdom of Elphegort.[15] As a result of the following Lucifenian Revolution, the kingdom was colonized by the Kingdom of Marlon.[16] Adopting a policy of imperialism, Marlon invaded both Beelzenia and Asmodean through Lucifenia in EC 505 before the war abruptly ended.[17]

In EC 508, Divine Levianta suffered terrorist attacks enacted by Neo Apocalypse. Two years later, Marlon granted Lucifenia its sovereignty, with the former kingdom reorganizing itself into a republic.[18] In EC 573, the nations of Evillious agreed to the establishment of the World Police.[19] Decades later in EC 592, the continent of Maistia was discovered and subsequently colonized by the Freezis Foundation for trade.[20]

In EC 609, the population of Toragay was decimated by Margarita Blankenheim, causing international tensions to rise.[21] Immediately afterward, a string of murders in Rolled perpetrated by Lemy Abelard raised similar fears across the different nations. In EC 776, Maistia declared independence, becoming known as the United States of Maistia.[22]

In EC 842, the tailor Kayo Sudou caused an incident that greatly affected the world.[23] In EC 878, the nations of Lucifenia, Elphegort, Marlon and Levianta signed the Aishikeru Treaty in an effort of solidarity, coming together to form the Union State of Evillious.[24] A century later, corruption seeped into its justice system, reaching its high point in the Dark Star Scandal caused by Gallerian Marlon and eventually leading to the Leviantan Civil War in EC 983.[25]

In EC 993,[26] Elphegort invaded Lucifenia and all of Evillious was pulled into a worldwide war.[27] In EC 998, Elphegort launched its weapon, Punishment, all over the world, destroying all life in the Third Period and causing it to merge with the Hellish Yard.[28]

A race of humans native to Asmodean. Attributed to the country's geographical placement and history, Asmodeans were diverse in appearance. As part of this, they ranged in hair colors from silver to purple. The race's skin color also varied, with members having both pale or dark tones.[29]

An ethnicity of human native to Asmodean, characterized by its members wearing masks to prevent exposing their faces. Although an ethnic minority, it was generally tolerated within the borders of Asmodean and its members typically did mercenary work.[30]

An ethnicity of human native to Maistia. Its members were characterized by their dark skin and brown hair and were mostly employed as slaves.[31]

A race of human native to Beelzenia. Owing to their history, Beelzenians varied in appearance but typically had red or brown hair and similarly-colored eyes.[32]

A race of human native to Elphegort. Modeled after Held's human form in the Second Period,[33] Elphes were known for their pale skin, green hair and green eyes. Despite their homogeneity, like most other races Elphes could be born with varying appearances, such as having different shades of hair.[34] In EC 500, a significant portion of its population was wiped out during the war between Lucifenia and Elphegort.[35]

A race of human native to Jakoku. Its members were characterized by their pale skin and black hair.[36]

A race of human native to Levianta. Members of the race had varied appearances owing to the country's history, and several members were organized into clans possessing magical power.[37] After the Levianta Catastrophe, the race was largely wiped out, although there were several survivors to continue the lineage.[38]

A race of humans native to Levianta, characterized by their pale skin and pink hair. Members of the Loop Octopus Clan were also the sole possessors of the prophetic dream ability.[39] Following the Levianta Catastrophe, a majority of the clan's members were wiped out, though there were a few survivors that eventually assimilated into the Asmodean population.[40]

A race of human native to Lucifenia. Owing to its history, Lucifenians were diverse in appearance and could have hair ranging from brown to red,[41] although blonde hair was also not uncommon.[42]

A race of human native to Marlon. Although typical Marlons had pale skin and brown or black hair, male members of the Marlon Royal Family were known to have blue hair and blue eyes.[43]

A race of humans native to Elphegort.[44] They were characterized by their pale skin, red eyes and white hair. After the Venomania Event,[45] Netsumas suffered from severe persecution by devout Levin believers and became few in number by the EC 500s.[46]

A race of human native to the country of Lucifenia. Its members belonged to the Lucifenian Royal Family and were characterized by their pale skin, light blue eyes and blond hair.[47]

Humans were a bipedal race of mammals. Composed of a soul, body, and mind, they were capable of thinking analytically and solving problems, as well as store memories of past experiences. Humans perceived the world using the main senses of sight, hearing, touch, smell and taste. Human dispositions varied per individual, though they were susceptible to the effects of Hereditary Evil Raiser Syndrome.[48]

Humans were omnivores and required to eat and drink in order to gain energy for bodily functions. Humans were also capable of sexually reproducing, with the average human pregnancy lasting for nine months. During creation, humans were modeled with a large variety of differing physical traits, such as hair, skin, and eye color. However, they were more likely to inherit the traits of their ancestors over the generations. Some humans were also born with magical potential, making them suited to learning and casting magic techniques.